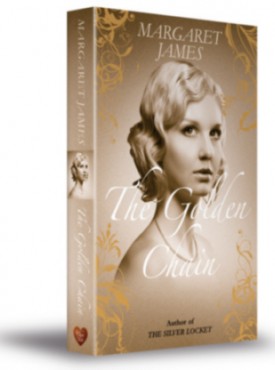 Sequel to The Silver Locket

1931 is the year that changes everything for Daisy Denham. Her family has not long swapped life in India for Dorset, England when she uncovers an old secret.

At the same time, she meets Ewan Fraser –  a handsome dreamer who wants nothing more than to entertain the world and for Daisy to play his leading lady.

Ewan offers love and a chance to escape with a touring theatre company. As they grow closer, he gives her a golden chain and Daisy gives him a promise – that she will always keep him in her heart.

But life on tour is not as they’d hoped, Ewan is tempted away by his career and Daisy is dazzled by the older, charismatic figure of Jesse Trent. She breaks Ewan’s heart and sets off for a life in London with Jesse.

The Golden Chain is the second novel in the Charton Minster Series, follows The Silver Locket concludes with The Penny Bangle, The Wedding Diary and Magic Sometimes Happens.