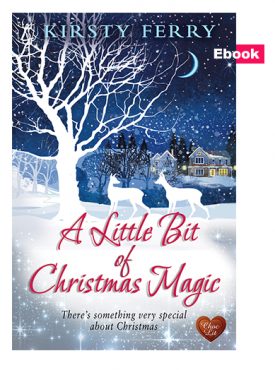 A Little Bit of Christmas Magic

As a wedding planner at Carrick Park Hotel Ailsa McCormack has devoted herself to making sure couples get their perfect day, but just occasionally that comes at a price – in this case, organising a Christmas Day wedding at the expense of her own Christmas.

Not that Ailsa minds. There’s something very special about Carrick Park during the festive season and she’s always been fascinated by the past occupants of the place; particularly the beautiful and tragic Ella Carrick, whose striking portrait still hangs at the top of the stairs.

And then an encounter with a tall, handsome and strangely familiar man in the drawing room on Christmas Eve sets off a chain of events that transforms Ailsa’s lonely Christmas into a far more magical occasion than she could have ever imagined …

Kirsty Ferry is from the North East of England and lives there with her husband and son. She won the English Heritage/Belsay Hall National Creative Writing competition in 2009 and has had articles and short stories published in Peoples Friend, The Weekly News, It’s Fate, Vintage Script, Ghost Voices and First Edition. Her work also appears in several anthologies, incorporating such diverse themes as vampires, crime, angels and more.