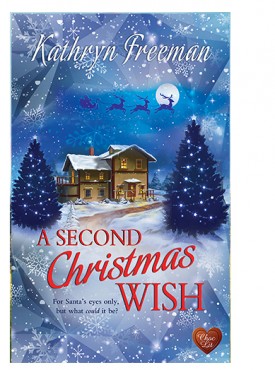 Out now!
Bestseller on Kindle!

Do you believe in Father Christmas?

For Melissa, Christmas has always been overrated. From her cold, distant parents to her manipulative ex-husband, Lawrence, she’s never experienced the warmth and contentment of the festive season with a big, happy family sitting around the table.

And Melissa has learned to live with it, but it breaks her heart that her seven-year-old son, William, has had to live with it too. Whilst most little boys wait with excitement for the big day, William finds it difficult to believe that Father Christmas even exists.

But then Daniel McCormick comes into their lives. And with his help, Melissa and William might just be able to find their festive spirit, and finally have a Christmas where all of their wishes come true …

Available as an eBook on all platforms and as a paperback from all good book shops and online stores.

Kathryn was born in Wallingford, England but has spent most of her life living in a village near Windsor. After studying pharmacy in Brighton she began her working life as a retail pharmacist. She quickly realised that trying to decipher doctor’s handwriting wasn’t for her and left to join the pharmaceutical industry where she spent twenty happy years working in medical communications. In 2011, backed by her family, she left the world of pharmaceutical science to begin life as a self-employed writer, juggling the two disciplines of medical writing and romance. Some days a racing heart is a medical condition, others it’s the reaction to a hunky hero…