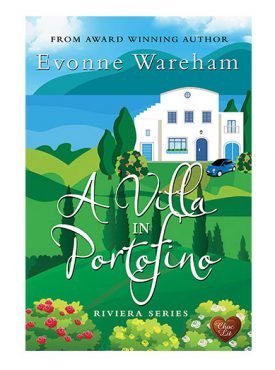 A Villa in Portofino

Finalist for the Jackie Collins Award for Romantic Thriller!

From chambermaid to “got it made” …

When hotel cleaning temp and poetry academic Megan Morrison finds out she’s inherited an Italian villa and small fortune from her estranged great-great aunt Olwen, she doesn’t quite know how to react. That is, until she travels to Portofino to see Il Giardino delle Rose for herself. Then she knows exactly what she has to do: live there!

Enchanted by the beauty of the house and gardens, fascinated by the history, and more than a little intrigued by handsome hired landscape gardener Gideon West, Megan can immediately see the villa’s potential as a dream home.

But having long-lost relatives sometimes means long-lost secrets – and it seems that Olwen had plenty of those. Could these secrets and a jealous obsession be powerful enough to drive Megan out of the house that she’s already fallen in love with?

Available as an eBook and Audio download on all platforms. Paperback available from Amazon.

See all of Evonne’s novels here…