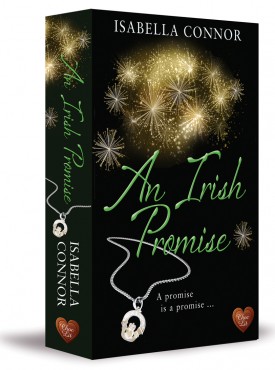 Available in Paperback as an eBook and audio CD/download

A promise is a promise …

Art historian, Rachel Ford has returned to the Irish village of Kilbrook intent on keeping her promise to take revenge on the school bullies who ruined her childhood and destroyed her family.

Australian actor, Finn MacKenzie sets hearts fluttering when he turns up in sleepy Kilbrook to help his aunt with a school Christmas production. He seems to have a charmed life, yet his confident façade hides heartbreak and tragedy. Although Finn isn’t looking for love, when he meets the mysterious Rachel, there’s a definite spark between them.

Rachel is torn between her desire for revenge and this new love affair. She doesn’t want to deceive Finn, but can she trust him to keep her real identity a secret? And will he understand why she must keep her promise, no matter the cost?

Available in paperback and audio CD/download from most English speaking countries and online bookstores. eBook available on all the major platforms. Isabella Connor is the pen name for Liv Thomas and Valerie Olteanu.

Liv Thomas was born and raised in the South of England. She always had the dream of becoming a writer, but never had the confidence to pursue it completely. After positive responses to Lord of the Rings fan-fiction, she decided it was time to make the dream a reality.
Wife and mum, Liv works for the NHS, and is employed at the hospital which first featured in Channel 4’s One Born Every Minute. Liv is a member of the Romantic Novelists’ Association.

Valerie Olteanu grew up in Scotland, and her childhood ambitions were to travel and to be a writer. After studying English and Art History at the University of Glasgow, she moved to London where she worked in the Literature Department of the Arts Council England.
Some years later, she decided to teach English and see the world. She lived and worked in Croatia, the West Bank, and Mexico, before settling with her husband in Canada. She is currently an adult educator in Burnaby, British Columbia.

Beneath an Irish Sky was their debut novel with Choc Lit.