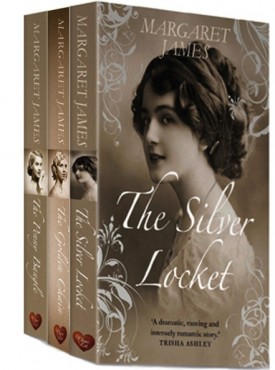 Available as an ebook only

The Charton Minster trilogy combines The Silver Locket, The Golden Chain and The Penny Bangle.

Starts in 1914 and ends in 1948. A compelling and intensely romantic tale of the lives of a Dorset family throughout the wars. Set in the UK, France, Belgium, Egypt and Italy.

If life is cheap, how much is love worth?

It’s 1914 and young Rose Courtenay has a decision to make. Please her wealthy parents by marrying the man of their choice – or play her part in the war effort? The chance to escape proves irresistible and Rose becomes a nurse. Working in France, she meets Lieutenant Alex Denham, a dark figure from her past. He’s the last man in the world she’d get involved with – especially now he’s married.

But in wartime nothing is as it seems. Alex’s marriage is a sham and Rose is the only woman he’s ever wanted. As he recovers from his wounds, he sets out to win her trust. His gift of a silver locket is a far cry from the luxuries she’s left behind.

What value will she put on his love?

1931 is the year that changes everything for Daisy Denham. Her family has not long swapped life in India for Dorset, England when she uncovers an old secret. At the same time, she meets Ewan Fraser – a handsome dreamer who wants nothing more than to entertain the world and for Daisy to play his leading lady.

Ewan offers love and a chance to escape with a touring theatre company. As they grow closer, he gives her a golden chain and Daisy gives him a promise – that she will always keep him in her heart.

But life on tour is not as they’d hoped, Ewan is tempted away by his career and Daisy is dazzled by the older, charismatic figure of Jesse Trent. She breaks Ewan’s heart and sets off for a life in London with Jesse.

When should you trust your heart?

It’s 1942 when Cassie Taylor reluctantly leaves Birmingham to become a land girl on a farm in Dorset. There she meets Robert and Stephen Denham, twins recovering from injuries sustained at Dunkirk. Cassie is instantly drawn to Stephen, but is wary of the more complex Robert – who doesn’t seem to like Cassie one little bit.

At first, Robert wants to sack the inexperienced city girl. But Cassie soon learns, and Robert comes to admire her courage, finding himself deeply attracted to Cassie. Just as their romance blossoms, he’s called back into active service.

Anxious to have adventures herself, Cassie joins the ATS. In Egypt, she meets up with Robert, and they become engaged. However, war separates them again as Robert is sent to Italy and Cassie back to the UK. Robert is reported missing, presumed dead.

Stephen wants to take Robert’s place in Cassie’s heart. But will Cassie stay true to the memory of her first love, and will Robert come home again?

The trilogy is only available combined as an ebook on most major ebook platforms.