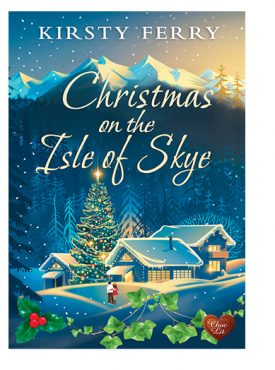 Christmas on the Isle of Skye

How far would you go to be with the one you love at Christmas?

The Isle of Skye is a magical place, especially at Christmas, and there’s no place Zac Fallon would rather be. But whilst Zac has everything he needs on Skye, there’s still something missing – and that something is a somebody called Ivy McFarlane.

Ivy used to work with Zac but then spread her wings and moved to Glastonbury. He’s missed her ever since. Now it’s almost Christmas and Zac realises that the Ivy shaped hole in his life is too big to bear. So starts his festive mission to the mainland – but will he be back in time to spend Christmas in Skye? And, more importantly, will Ivy be with him?

Other books in series: Spring at Taigh Fallon and Summer at Carrick Park and Jessie’s Little Bookshop by the Sea.

Available as an eBook and Audio download on all platforms.Paperback arriving October ’21.