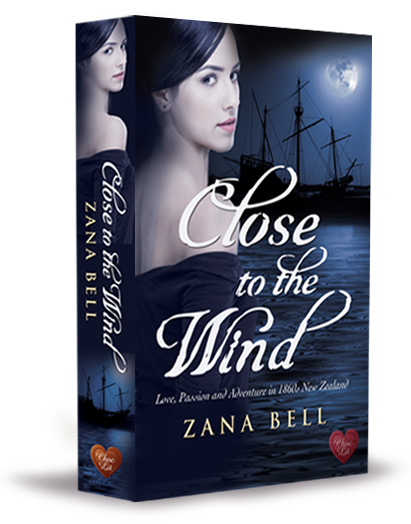 Close to the Wind

What would you give to be free?

Georgiana da Silva is catapulted out of the Victorian drawing rooms and into a world of danger when she escapes her fiendish fiancé to engage in a mad dash across the world to save her brother before an unknown assassin can find him.

Meanwhile, Captain Harry Trent is setting sail for New Zealand. With a mission to complete and the law on his heels, he’s got enough trouble of his own without further complications.

Thrown together, unable to trust anyone, Georgiana and Harry are intent on fulfilling their missions despite the distractions of the other. But liberty comes at a price and the closer they get, the more they must question the true cost of being free.

Zana Bell lives in New Zealand. She describes herself as a big fan of Georgette Heyer and combines the elements of light-hearted romance with travel and adventure. Zana’s first book was a young adult time travel, published in New Zealand and Australia. Her second novel was an historical, based on the life and times of Charlotte Badger, convict, pirate and New Zealand’s first English woman immigrant. It was voted Single Titles 10 Best Books in 2008. She is also the author of two contemporary romances from Harlequin’s Super romance line. The first won a Cataromance Reviewer’s Choice award 2010. Close to the Wind was her debut novel with Choc Lit and the return to her love of writing historical novels.