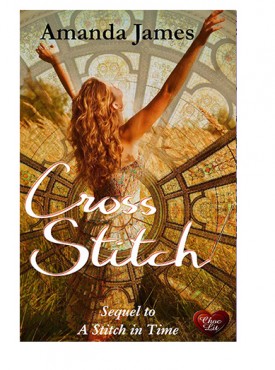 It should be the happiest day of her life. Despite past heartache, Sarah Yates is finally marrying her true love, John Needler.

But Sarah and John can’t pretend they’re an ordinary couple. They’re time travellers and where time travel is involved, nothing runs smoothly. One minute Sarah is saying her vows and the next she is hurtled back in time to a country that is on the cusp of war, and into the company of the bad-tempered Veronica Ratchet.

Newly-wedded bliss is certainly not on the cards for Sarah as events see her travelling from the British punk era to 1950’s America. And even when she returns home she can’t escape Veronica.

But when the past and the present collide, that’s when the real problems start …

Sequel to A Stitch in Time

Available in paperback and audio CD/download from most English speaking countries and online bookstores. eBook available on all the major platforms.

Amanda James was born in Sheffield and now lives in Cornwall with her husband and two cats. In her spare time, she enjoys gardening, singing and spending lots of time with her grandson. She also admits to spending far too much time chatting on Twitter and Facebook! Amanda recently left her teaching role (teaching history to sixth form pupils) to follow her ambition to live her life doing what she most enjoys—writing.

Amanda is a published author of short stories and her first novel with Choc Lit, A Stitch in Time was chosen as a Top Pick in RT Book Reviews magazine in the US in July 2013 and won a 2013 Reviewers’ Choice Award from Single Titles.