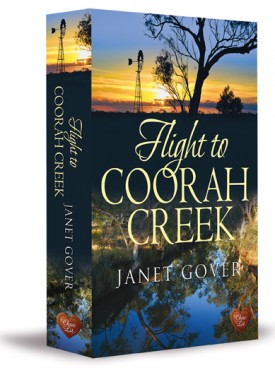 View Gallery
By Janet Gover In Contemporary romance, Janet Gover and Series Tagged In 2014 and March.

What happens when you can fly, but you just can’t hide?

Only Jessica Pearson knows the truth when the press portray her as the woman who betrayed her lover to escape prosecution. But will her new job flying an outback air ambulance help her sleep at night or atone for a lost life?

Doctor Adam Gilmore touches the lives of his patients, but his own scars mean he can never let a woman touch his heart.

es wants to build a safe future for her two children. Without a man – not even one as gentle as Jack North.

In Coorah Creek, a town on the edge of nowhere, you’re judged by what you do, not what people say about you. But when the harshest judge is the one you see in the mirror, there’s nowhere left to hide. Book 1 in the Coorah Creek series, followed by The Wild One.

Available in paperback, large print, audio CD and audio download in the UK, US, Canada, Australia, South Africa, New Zealand, Dubai and most English speaking countries plus online bookstores. Ebooks available on all the major platforms. Janet’s first short story, The Last Dragon, was published in 2002. Since then she has published numerous short stories, one of which won the Elizabeth Goudge Award from the Romantic Novelists’ Association. She has previously published three novels with Little Black Dress, Flight to Coorah Creek was Janet’s debut with Choc Lit.