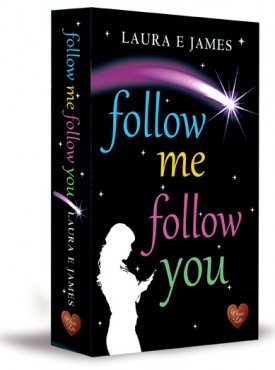 You save me and I’ll save you

Victoria Noble has pulled the plug on romance. As director of the number one social networking site, EweSpeak, and single mother to four-year-old Seth, she wrestles with the work-life balance.

Enter Chris Frampton, Hollywood action hero and Victoria’s first love. His return from LA has sparked a powder keg of media attention, and with secrets threatening to fuel the fire, he’s desperate to escape. But finding a way forward is never simple. Although his connection with Victoria has lasted the test of time, has he been adrift too long to know how to move on?

With the risk of them breaking, will either #follow their heart?

Laura is married and has two children. She lives in Dorset, but spent her formative years in Watford, a brief train ride away from the bright lights of London. Here she indulged her love of live music, and, following a spectacular Stevie Nicks gig, decided to take up singing, a passion that scored her second place in a national competition.

Laura is a graduate of the Romantic Novelists’ Association’s New Writers’ Scheme, a member of her local writing group, Off The Cuff, and an editor of the popular Romaniacs blog.

Laura was runner-up twice in the Choc Lit Short Story competitions. Her story Bitter Sweet is to be released in the forthcoming Romantic Novelists’ Association’s Anthology to be published in 2014. Truth or Dare, Laura’s debut novel, is shortlisted for the 2014 Joan Hessayon New Writers’ Award.