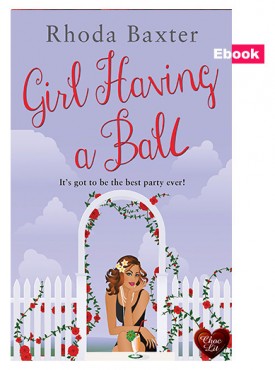 Girl Having a Ball

Shortlisted: 2017 Romantic Novel of the Year Award
Book 2 in series

What if you had to learn to stand on your own feet?

Although Stevie lost her parents when she was very young, she’s always been able to rely on her brother, Marsh. But now Marsh is married and Stevie feels like she is losing him too.
Determined to prove her independence, Stevie sets about transforming her life, giving up her dead-end job and following her passion for events management.

Her first assignment takes her to a stunning manor house in Oxford where she is tasked with organising a charity ball on a shoestring. Between canapé worries, celebrity guests and trying to keep the hyper-critical Lady Beryl happy, Stevie’s teenage crush, Tom, resurfaces to confuse things even further.

But ‘poor needy little Stevie’ is now ‘Stevie the strong woman’ and she won’t let a man get in the way of her dreams – will she?

Second novel in series, sequel to Girl on the Run.

Available as an eBook on all the major platforms.

Rhoda Baxter writes contemporary romantic comedies. As her father’s engineering skills were in international demand, Rhoda’s childhood was split between the UK, the Pacific island of Yap, Nigeria and Sri Lanka. Rhoda studied at the University of Oxford and holds a DPhil in microbiology.

When choosing a pen name, she got nostalgic about the bacteria she used to study, (Rhodobacter species) and named herself Rhoda Baxter after them. Now her day job involves protecting and commercialising Intellectual Property generated by University research. This allows her to stay in touch with cutting edge scientific research without having to spend long hours in the lab.

Rhoda is married and has 2 children. They live together in Beverley, East Yorkshire.