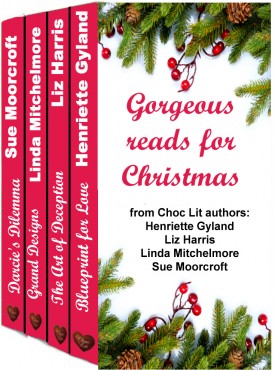 Darcie’s Dilemma: How do you weigh one love against another?

Things haven’t been easy for Darcie Killengrey; left with the responsibility of her troubled teenage brother Ross and a past of unhappiness and heartbreak.

And then Jake Belfast strides back into her life, as acerbic and contrary as he is exciting and handsome— he also just happens to be her best friend’s brother.

Having parted on bad terms two years previously, Darcie and Jake now find themselves flung back together. Tensions reach new heights when they’re forced to work in the same place and the pair struggle to put the past behind them.

And, all the while, Ross is becoming increasingly involved with a dangerous influence, which looks set to make Darcie’s problems with Jake pale into insignificance …

Carrie Fraser is an interior decorator and cannot believe her luck when she is invited to work at Oakenbury Hall – a beautiful manor house in the heart of the English countryside. Nor can she quite get over the owner of Oakenbury – the gorgeous (not to mention, completely loaded!) Morgan Harrington. Morgan appears to have it all, but his previous life is clouded with sadness and heartache, which Carrie can relate to only too well. He is intent on running away from his troubled past to a glamorous, celebrity-filled existence in Cannes, but there’s a problem…

Morgan is bound by his late father’s wishes to keep Oakenbury Hall within the family and have children, and the more time Carrie spends with him, the more she yearns to be the woman to fulfil this wish. But the likes of Carrie Fraser could never be enough for a high-flying businessman like Morgan …could she?

The Art of Deception: Jenny O’Connor can hardly believe her luck when she’s hired to teach summer art classes in Italy. Whilst the prospect of sun, sightseeing and Italian food is hard to resist, Jenny’s far more interested in her soon-to-be boss, Max Castanien. She’s blamed him for a family tragedy for as long as she can remember and now she wants answers.

But as the summer draws on and she spends more time with Max, she starts to learn first hand that there’s a fine line between love and hate.

Hazel Dobson is pleased when she gets temp work at Gough Associates -an architectural company based in a beautiful manor house in Norfolk. Whilst it’s a far cry from the bright lights of London, Hazel is keen to get away from a mundane job with a lecherous boss, and to spend some time with Great Aunt Rose, her only surviving relative.

Jonathan Gough is the owner of Gough Associates and despite his wealth and good looks, he has a tragic past to equal Hazel’s, having been left with the responsibility of two young sons.

There’s a real chance that within each other, the pair could find the family they crave. But there is something strange going on at Combury Manor- and some people just don’t want Hazel and Jonathan to be happy…