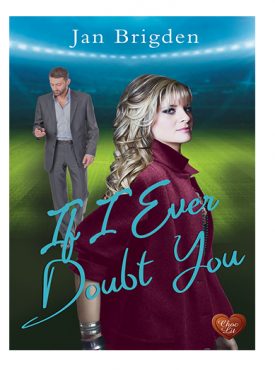 If I Ever Doubt You

She might have scored a celebrity footballer, but the game isn’t over yet …

Rebecca Dunning should be blissfully happy – after a whirlwind weekend, she and top footballer Alex Heath are still going strong. But as the murkier side of the celebrity lifestyle reveals itself, so does the creeping doubt.

Rebecca finds herself isolated in the fake, flashy world of toxic WAG cliques and ruthless reporters, and when a mysterious online admirer follows Alex’s every move, she struggles to cope. Can she keep playing the media game for the man she loves, or will she have to admit defeat?

Sequel to As Weekends Go

Available as an eBook on all the major platforms . Jan lives in South East London with her husband and motley crew of cuddly toys. Jan’s written for pleasure from a young age; short stories for classmates, odes for workmates, fun quizzes for family and friends, progressing to her first novel, the idea for which sprang from a script she composed as part of a creative writing course assignment via The Writers Bureau. Following much secret plotting, research and feigning of passion for the customer accounts she was supposed to be reconciling during the day job, the chance finally arose to put pen to paper.

After attending many author talks, literary events, and connecting with writers and readers on Facebook and Twitter, Jan learned of and subsequently joined the Romantic Novelists’ Association New Writers’ Scheme. An avid reader, reviewer and all round book devotee, Jan is also one eighth of online group blog The Romaniacs.

Jan won Choc Lit’s Search for a Star competition with her debut, As Weekends Go.