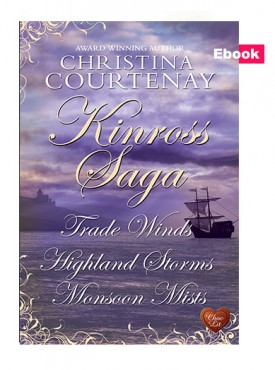 Marriage of convenience – or a love for life?

It’s 1732 in Gothenburg, Sweden, and strong-willed Jess van Sandt knows only too well that it’s a man’s world. She believes she’s being swindled out of her inheritance by her stepfather – and she’s determined to stop it. When help appears in the unlikely form of handsome Scotsman Killian Kinross, himself disinherited by his grandfather, Jess finds herself both intrigued and infuriated by him. In an attempt to recover her fortune, she proposes a marriage of convenience.

Then Killian is offered the chance of a lifetime with the Swedish East India Company’s Expedition and he’s determined that nothing will stand in his way, not even his new bride. He sets sail on a daring voyage to the Far East, believing he’s put his feelings and past behind him. But the journey doesn’t quite work out as he expects…

Who can you trust?

Betrayed by his brother and his childhood love, Brice Kinross needs a fresh start. So he welcomes the opportunity to leave Sweden for the Scottish Highlands to take over the family estate.

But there’s trouble afoot at Rosyth in 1754 and Brice finds himself unwelcome. The estate’s in ruin and money is disappearing. He discovers an ally in Marsaili Buchanan, the beautiful redheaded housekeeper, but can he trust her?

Marsaili is determined to build a good life. She works hard at being housekeeper and harder still at avoiding men who want to take advantage of her. But she’s irresistibly drawn to the new clan chief, even though he’s made it plain he doesn’t want to be shackled to anyone.

And the young laird has more than romance on his mind. His investigations are stirring up an enemy. Someone who will stop at nothing to get what he wants – including Marsaili – even if that means destroying Brice’s life forever …

Sometimes the most precious things cannot be bought…

It’s 1759 and Jamie Kinross has travelled far to escape his troubled past – from the pine forests of Sweden to the bustling streets of India.
In India he starts a new life as a gem trader, but when his mentor’s family are kidnapped as part of a criminal plot, he vows to save them and embarks on a dangerous mission to the city of Surat, carrying the stolen talisman of an Indian Rajah.

There he encounters Zarmina Miller. She is rich and beautiful, but her infamous haughtiness has earned her a nickname: “The Ice Widow”. Jamie is instantly tempted by the challenge she presents.

But when it becomes clear that Zarmina’s step-son is involved in the plot, he begins to see another side to her – a dark past to rival his own and a heart just waiting to be thawed. But is it too late?

‘A lush setting, vivid characters and a wonderful romance make this a delicious treat.’ Nicola Cornick

Christina’s novels have won many awards, including the Big Red Reads Fiction Award for The Scarlet Kimono and Historical Romantic Novel of the Year awards for both Highland Storms and The Gilded Fan. The Silent Touch of Shadows won a Best Historical Read award and Christina’s debut novel, Trade Winds, was also short-listed for the Pure Passion Award for Best Historical Fiction. .