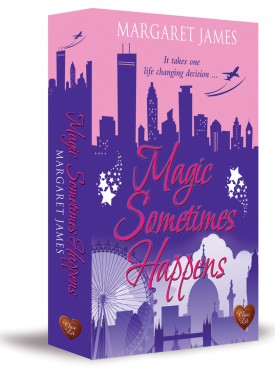 Available in paperback, audio CD/download and as an eBook

London-based PR and promotions consultant Rosie Denham has just spent a year in Paris where she’s tried but failed to fall in love. She’s also made a big mistake and can’t forgive herself.

American IT professor Patrick Riley’s wife has left him for a Mr Wonderful with a cute British accent and a house with a real yard. So Patrick’s not exactly thrilled to meet another Brit who’s visiting Minnesota, even if she’s hot.

Pat and Rosie couldn’t be more different.  She’s had a privileged English upbringing. He was raised in poverty in Missouri. Pat has two kids, a job that means the world to him and a wife who might decide she wants her husband back.

So when Pat and Rosie fall in love, the prospects don’t seem bright for them.

Magic Sometimes Happens is book 5 in the Charton Minster Series (The Silver Locket, The Golden Chain, The Penny Bangle and The Wedding Diary).

Available in paperback and audio CD/download from most English speaking countries and online bookstores. eBooks available on all the major platforms.