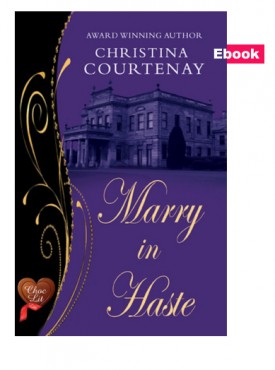 When James, Viscount Demarr confides in an acquaintance at a ball one evening, he has no idea that the potential solution to his problems stands so close at hand …

Amelia Ravenscroft is the granddaughter of a earl and is desperate to escape her aunt’s home where she has endured a life of drudgery, whilst fighting off the increasingly bold advances of her lecherous cousin. She boldly proposes a marriage of convenience.

And Amelia soon proves herself a perfect fit for the role of Lady Demarr. But James has doubts and his blossoming feelings are blighted by suspicions regarding Amelia’s past.

Will they find, all too painfully, that if you marry in haste you repent at leisure?

Available as a Kindle ebook, CD and Audio Download.