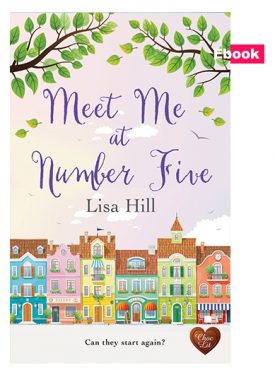 View Gallery
By Lisa Hill In Contemporary romance, Debuts and Lisa Hill Tagged In 2017 and June.

Meet Me at Number Five

What if finding happiness was a race against time?

Grace Cavendish knows a thing or two about horses – but what she doesn’t know is that her husband, top horse racing trainer Charlie Carrisbrook, is having a literal ‘roll in the hay’ right under her nose.

When the painful truth is revealed Grace has no choice but to move in with her highly-strung grandmother Clara and cousin Hennie; a single mum who has renounced men (at least that’s what she says!).

Determined to start again, Grace takes a job at the local cafe, Number Five. And whilst serving up coffee and cake is a far cry from the stables, she enjoys it – especially as she gets to work alongside the rather scrumptious Sam Whittaker.

But the past is racing to catch up with Grace. Can her life still be a romp to victory or will a devastating secret stop her dead in her tracks?

Winner of our Search for a Star! Lisa grew up in the village of Bussage, near Stroud in the Cotswolds until she returned to Cheltenham as a teenager. She is married to her very own hero, Matt, and has three sons, Hamish, Archie and Laurence. Her first encounter of a romance author was chats over the garden wall between her father, Godfrey, and Mrs Cooper from the neighbouring village of Bisley. It came as quite a surprise in later life to find that Mrs Cooper was in fact Jilly Cooper! Lisa’s writing inspiration now comes from other Cotswolds authors including Jill Mansell and Katie Fforde.

Lisa writes contemporary romance with a light-hearted tone. What interests her most is people; their motivations, emotions and relationships. It’s probably why her career to date has been based in property; she confesses herself that she is ‘naturally curious’.

When she’s not busy writing, helping Matt run his electrical empire, or being her sons’ taxi service Lisa enjoys running with her gun dog, Sparky. They are both currently training for the Stroud half-marathon although Sparky’s motivation lies much more in chasing rabbits.

Lisa is a graduate of the Romantic Novelists’ Association New Writers’ Scheme and attributes this supportive and informative scheme to her winning the Choc Lit Search for a Star competition 2016 with her debut novel Meet Me at Number Five.