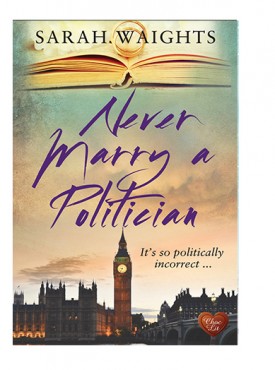 ‘Never, under any circumstances, marry a politician … ‘

In trying to be the model wife to Ralph, a fiercely ambitious politician, Emily has betrayed her heart and her principles. Once she was a promising journalist, but now reluctant domestic goddess is more her scene.

When unexpected events lead to Ralph becoming a candidate for Prime Minster, Emily finds maintaining the façade of picture-perfect family life an increasing struggle –especially when her romantic past comes back to haunt her in the form of tough-talking journalist, Matt Morley.

Matt is highly skilled at ‘digging the dirt’ and, sure enough, Ralph has a sordid secret that is soon uncovered. In the aftermath of the discovery, will Emily finally find the courage to be true to herself, or is she stuck in the world of PR tactics and photo opportunities for good?

Available in paperback from most English speaking countries and online bookstores. eBook available on all the major platforms. Sarah wrote her first book when she was five. With a father in the forces and the diplomatic corps she spent the best part of her childhood in UK boarding schools, joining her parents in exotic destinations during the school holidays.

After obtaining a degree in music she gave up classical singing and took up a career where she could indulge her love of writing. After several years in public relations, campaigning, political lobbying and freelance journalism she realized her preference for making things up and switched to writing novels instead.

She takes an anthropological interest in family, friends and life in her West Sussex village where she lives in a cottage with roses around the door, along with her artist husband, their children and other pets.

Never Marry a Politician, Sarah debut novel, was a runner up in the 2014 Good Housekeeping Novel Writing Competition.