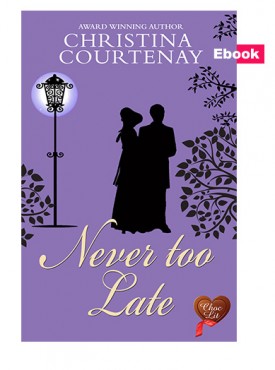 Can true love be rekindled?

Maude is devastated when the interference of her strict father prevents her from eloping with Luke Hexham. It is not long before she is married off to Edward, Luke’s cousin – a good match in her father’s eyes but an abhorrent one to his daughter.

Eight years later, Edward is dead. Maude, now Lady Hexham, is appalled to find his entire estate is to go to Luke – the man she still loves – with no provision for either herself or her young daughter. Luke has never forgotten Maude’s apparent betrayal, but he has the means to help her.

Soon Maude and Luke realise that perhaps it is never too late for true love. But, even after eight years, there is still somebody who would stop at nothing to keep them apart …

Currently only available as a Kindle eBook.