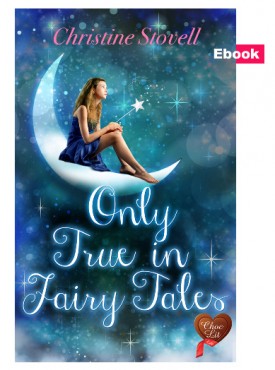 Only True in Fairy Tales

Available as a Kindle eBook and audio CD/download

Available in English and German

It’s never too late to believe in fairy tales …

Eloise Blake has been fascinated by Prospect House, the shadowy romantic Gothic house opposite, ever since she moved to the village of Hookfield.

When its new owner turns out to be best-selling crime author, Ross Farrell, whose work is grounded in gritty reality rather than happy endings, Eloise is determined to concentrate on her tapestry design business and her rescue dog, Gracie.

She’s already given up on knights in shining armour and happy ever afters.  Love, she thinks, is only true in fairy tales – even when Ross keeps appearing just when she needs help most.  But is he the Prince Charming she thought didn’t exist – or is he a beast in disguise?

Available as a Kindle eBook in English and German. Plus available in English as an Audio CD/download from most English speaking countries and online bookstores. Winning a tin of chocolate in a national essay competition at primary school inspired  Christine Stovell to become a writer! After graduating from University of East Anglia, she took various jobs in the public sector writing research papers and policy notes by day and filling up her spare drawers with embryonic novels by night.  Losing her dad to cancer made her realise that if she was ever going to get a novel published she had to put her writing first. Setting off, with her husband, from a sleepy seaside resort on the east coast in a vintage wooden boat to sail halfway round Britain provided the inspiration for her debut novel Turning the Tide and Follow a Star. Turning The Tide was a top 100 Bestseller with Amazon Kindle and spent months in the Top 10 Chart for Adult Contemporary Romance. Christine has also published numerous short stories and articles. Christine lives in Wales.