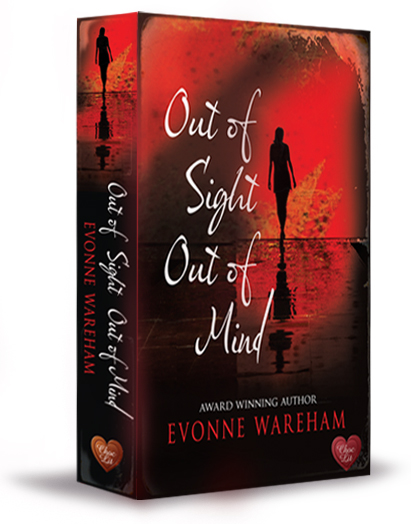 Out of Sight Out of Mind

Everyone has secrets. Some are stranger than others. Madison Albi is a scientist with a very special talent – for reading minds. When she stumbles across a homeless man with whom she feels an inexplicable connection, she can’t resist the dangerous impulse to use her skills to help him.

J is a non-person – a vagrant who can’t even remember his own name. He’s got no hope, until he meets Madison. Is she the one woman who can restore his past?

Madison agrees to help J recover his memory, but as she delves deeper into his mind, it soon becomes clear that some secrets are better off staying hidden.

Is J really the man Madison believes him to be?

Evonne’s debut novel, Never Coming Home won the 2012 Joan Hessayon New Writers’ Award, the 2013 Colorado Romance Writers’ Award for Romantic Suspense, the Oklahoma National Readers’ Choice Award for Romantic Suspense plus was a nominee for a Reviewers’ Choice Award from RT Book Reviews.
Evonne’s novels include: Never Coming Home, Out of Sight Out of Mind and Summer in San Remo.