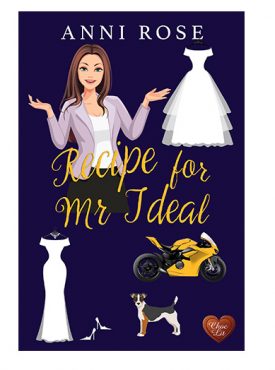 Would you settle for Mr Less-Than-Ideal for a chance at happily-ever-after?

Registrar Maddie Winter has overseen enough weddings to know that marriage is not just for Christmas (or Valentine’s Day) – it’s for life, and regardless of whether the ceremony involves specially trained owls, dinosaurs or the police, it should be only the beginning of a story that will end in happily-ever-after.

Saying that, Maddie’s own married life is far from perfect – her husband, David, is more interested in his phone than in her, and when he suddenly walks out, Maddie’s long-held beliefs are put to the test.

Except Maddie knows David was never really her ‘Mr Ideal’; that was sweet, funny, motorbike-riding Josh Diamond – although obviously not that ideal, as he did dump her to move to the States. Even so, when Josh unexpectedly rides back into town, Maddie begins to wonder whether her happily-ever-after could still be to come …

Available as an eBook & audiobook on all platforms. Paperback available from Amazon.

See all of Anni’s books here …