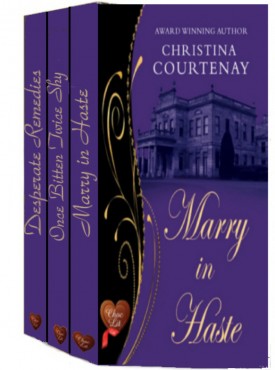 They are all available to purchase separately or together as a set of three on Kindle (more to be added soon).

When James, Viscount Demarr confides in an acquaintance at a ball one evening, he has no idea that the potential solution to his problems stands so close at hand …

Amelia Ravenscroft is the granddaughter of a earl and is desperate to escape her aunt’s home where she has endured a life of drudgery, whilst fighting off the increasingly bold advances of her lecherous cousin. She boldly proposes a marriage of convenience.

And Amelia soon proves herself a perfect fit for the role of Lady Demarr. But James has doubts and his blossoming feelings are blighted by suspicions regarding Amelia’s past.

Will they find, all too painfully, that if you marry in haste you repent at leisure?

“Once was more than enough!”

Jason Warwycke, Marquess of Wyckeham, has vowed never to wed again after his disastrous first marriage, which left him with nothing but a tarnished reputation and a rather unfortunate nickname − ‘Lord Wicked’.

That is, until he sets eyes on Ianthe Templeton …

Ianthe lives in the shadow of her beautiful twin sister, Serena, and longs to escape the “mindless entertainments” she is forced to endure in London. She soon finds herself captivated by the enigmatic Wyckeham and tempted by his promises of a new life in the idyllic English countryside …

But can Wyckeham and Ianthe overcome the malicious schemes of spiteful siblings and evil stepmothers to find wedded bliss? Or will Wyckeham discover, all too painfully, that the past has come back to bite him for a second time?

‘She would never forget the day her heart broke …’

Lexie Holloway falls desperately in love with the devastatingly handsome Earl of Synley after a brief encounter at a ball. But Synley is already engaged to be married and scandal surrounds his unlikely match with the aging, but incredibly wealthy, Lady Catherine Downes.

Heartbroken, Lexie resolves to remain a spinster and allows circumstance to carry her far away from England to a new life in Italy. However, the dashing Earl is never far from her thoughts.

Years later, she returns home to find that much has changed – including the marital status of Synley. Whilst the once notorious Earl is a reformed character, the problems caused by his first marriage continue to plague him and it appears that his life may be in danger.

Can Lexie help Synley outwit those who wish to harm him and rekindle the flame ignited all those years ago, or will her associations with the Earl bring her nothing but trouble?