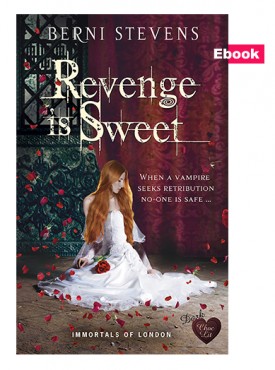 View Gallery
In Berni Stevens, Series and Vampires Tagged In 2016 and July.

Book 2 - Immortals of London
OUT NOW!

Hell hath no fury like a vampire seeking revenge …

Life hasn’t been exactly normal for Ellie since she became a vampire. Although joining the legion of the undead was always going to take some getting used to, even if you are the partner of Will Austen, the Elder of London.

But when Daniel, a fifteen-year-old fledgling vampire, unexpectedly turns up at Ellie’s and Will’s Highgate home, things start getting very strange – and more than a little scary.

Events take a devastating turn as a mystery troublemaker leaves behind a trail of carnage – and it soon becomes clear they will stop at nothing to get the Elder’s attention, even if it involves hurting the person he cherishes the most …

But when it comes to Ellie, Will Austen is the wrong vampire to mess with.

Available as an eBook from all the major platforms.