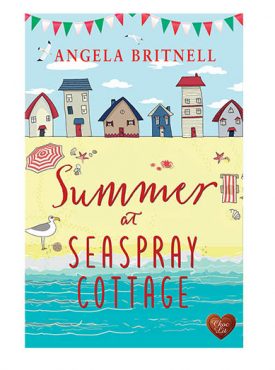 Out now!
Selected as Book of the Month on Kobo UK.

What would you do if you inherited a Cornish cottage by the sea?

If you’re Thea Armitage, sell it as soon as possible. Whilst there’s no denying that Seaspray Cottage has its charm, it just holds too many bad memories for Thea to consider keeping it – although at least spending the summer preparing it for sale gives her a distraction from troubles back home in Tennessee.

What Thea didn’t count on was her worst Cornish memory moving in right next door. Local bad boy Harry Venton played no small part in Thea’s decision never to return to Cornwall twenty years before – and now he’s her neighbour! Could things get any worse?

Except Harry isn’t the boy he was, and as Thea comes to realise that her opinion of him was built on lies and misunderstandings, perhaps things will start looking up for her summer at Seaspray Cottage …

Available as an eBook and Audio download on all platforms. Paperback available from Amazon.