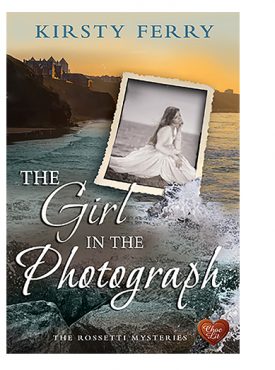 View Gallery
By Kirsty Ferry In Ghosts, Kirsty Ferry, Series and Time-slip Tagged In 2018 and March.

The Girl in the Photograph

What if the past was trying to teach you a lesson?

Staying alone in the shadow of an abandoned manor house in Yorkshire would be madness to some, but art enthusiast Lissy de Luca can’t wait. Lissy has her reasons for seeking isolation, and she wants to study the Staithes Group – an artists’ commune active at the turn of the twentieth century.

Lissy is fascinated by the imposing Sea Scarr Hall – but the deeper she delves, the stranger things get. A lonely figure patrols the cove at night, whilst a hidden painting leads to a chilling realisation. And then there’s the photograph of the girl; so beautiful she could be a mermaid … and so familiar.

As Lissy further immerses herself, she comes to an eerie conclusion: The occupants of Sea Scarr Hall are long gone, but they have a message for her – and they’re going to make sure she gets it.

Book 3 in The Rossetti Mysteries, Book 1 – Some Veil Did Fall. Book 2 – The Girl in the Painting Book 4 – A Little Bit of Christmas Magic

Available as an eBook on all platforms and in paperback from all good bookshops and online stores.

Kirsty Ferry is from the North East of England and lives there with her husband and son. She won the English Heritage/Belsay Hall National Creative Writing competition in 2009 and has had articles and short stories published in Peoples Friend, The Weekly News, It’s Fate, Vintage Script, Ghost Voices and First Edition. Her work also appears in several anthologies, incorporating such diverse themes as vampires, crime, angels and more.