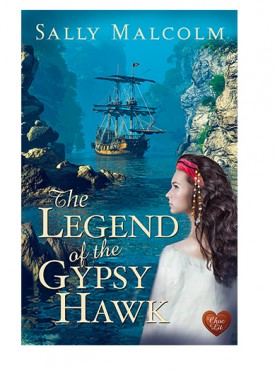 The Legend of the Gypsy Hawk

Available as an eBook and paperback!

Come then, and I’ll tell you the tale of the Gypsy Hawk and her wily captain – the infamous Zachary Hazard …’

To Amelia Dauphin, freedom is her most prized possession and she will stop at nothing to keep it. Daughter of a Pirate King and the youngest captain in her father’s fleet, she lives on the island of Ile Sainte Anne, where pirates roam free and liberty reigns.

Zachary Hazard, captain of the Gypsy Hawk, hasn’t been seen on Ile Sainte Anne for six years but his reputation precedes him. To Zach, liberty is the open water and he has little time for the land-bound pirate island.

But when he hears that Amelia’s people could be in danger, he has no choice but to return. And what begins then is a desperate fight for freedom and a legend in the making …

A swashbuckling pirate adventure. Pirates of the Caribbean for adults with a sizzling romance at the heart!

Available as an eBook on all platforms and in paperback. Sally lives in London, England with her American husband and two children. She is co-founder and commissioning editor of Fandemonium Books, the licensed publisher of novels based on the American TV series Stargate SG1, Atlantis and Universe.
Sally is the author of five of the Stargate novels. She has also written four audio Stargate dramas. And recently she completed work on three episodes of the video game Stargate SG-1: Unleashed which were voiced by Stargate SG-1 stars Richard Dean Anderson, Michael Shanks, Amanda Tapping and Chris Judge.

The Legend of the Gypsy Hawk is the first in the Pirates of Ile Sainte Anne series.