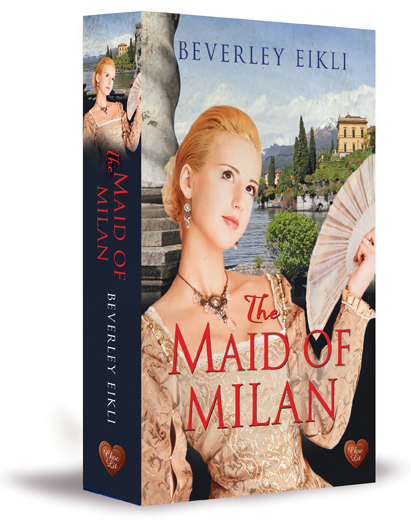 The Maid of Milan

Available in Paperback and as an ebook

How much would you pay for a clear conscience?

Adelaide Leeson wants to prove herself worthy of her husband, a man of noble aspirations who married her when she was at her lowest ebb.

Lord Tristan Leeson is a model of diplomacy and self-control, even curbing the fiery impulses of his youth to maintain the calm relations deemed essential by his mother-in-law to preserve his wife’s health.

A visit from his boyhood friend, feted poet Lord James Dewhurst, author of the sensational Maid of Milan, persuades Tristan that leaving the countryside behind for the London Season will be in everyone’s interests.

But as Tristan’s political career rises and Adelaide revels in society’s adulation, the secrets of the past are uncovered. And there’s a high price to pay for a life of deception.

Beverley Eikli wrote her first romance when she was seventeen. However, drowning the heroine on the last page was, she discovered, not in the spirit of the genre so her romance-writing career ground to a halt and she became a journalist.   After throwing in her secure job on South Australia’s metropolitan daily, The Advertiser, to manage a luxury safari lodge in the Okavango Delta, in Botswana, Beverley discovered a new world of romance and adventure in a thatched cottage in the middle of a mopane forest with the handsome Norwegian bush pilot she met around a camp fire.   Eighteen years later, after exploring the world in the back of Cessna 404s and CASA 212s as an airborne geophysical survey operator during low-level sorties over the French Guyanese jungle and Greenland’s ice cap, Beverley is back in Australia living a more conventional life with her husband and two daughters in a pretty country town an hour north of Melbourne.