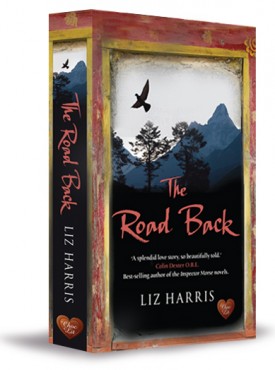 2012 Book of the Year from Coffee Time Romance & More

When Patricia accompanies her father, Major George Carstairs, on a trip to Ladakh, north of the Himalayas, in the early 1960s, she sees it as a chance to finally win his love. What she could never have foreseen is meeting Kalden – a local man destined by circumstances beyond his control to be a monk, but fated to be the love of her life.

Despite her father’s fury, the lovers are determined to be together, but can their forbidden love survive?

A wonderful story about a passion that crosses cultures, a love that endures for a lifetime, and the hope that can only come from revisiting the past.

Available in paperback, large print and audio CD/download  from most English speaking countries plus online bookstores. ebook available on all the major platforms. Liz was born in London and now lives in South Oxfordshire with her husband. After graduating from university with a Law degree, she moved to California where she led a varied life, trying her hand at everything from cocktail waitressing on Sunset Strip to working as secretary to the CEO of a large Japanese trading company, not to mention a stint as ‘resident starlet’ at MGM. On returning to England, Liz completed a degree in English and taught for a number of years before developing her writing career.

Liz’s debut novel, The Road Back, won a 2012 Book of the Year Award from Coffee Time Romance in the USA and her second novel A Bargain Struck was highly praised by the Daily Mail in the UK.