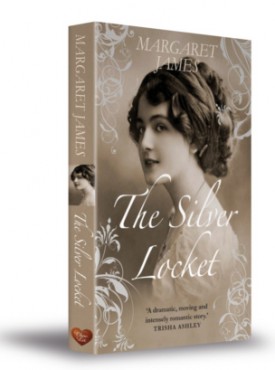 If life is cheap, how much is love worth?

It’s 1914 and young Rose Courtenay has a decision to make. Please her wealthy parents by marrying the man of their choice – or play her part in the war effort? The chance to escape proves irresistible and Rose becomes a nurse.

Working in France, she meets Lieutenant Alex Denham, a dark figure from her past. He’s the last man in the world she’d get involved with – especially now he’s married

But in wartime nothing is as it seems. Alex’s marriage is a sham and Rose is the only woman he’s ever wanted. As he recovers from his wounds, he sets out to win her trust. His gift of a silver locket is a far cry from the luxuries she’s left behind.

The Silver Locket is the first novel in the Charton Minster Series, followed by The Golden Chain and the The Penny Bangle, The Wedding Diary & Magic Sometimes Happens.

Margaret James was born and brought up in Hereford and now lives in Devon. She studied English at London University, and has written many short stories, articles and serials for magazines. She is the author of sixteen published novels. Her debut novel for Choc Lit, The Silver Locket, received a glowing review from the Daily Mail and reached the Top 20 Small Publishers Fiction List in November 2010 and in the same year a Reviewers’ Choice Award from Single Titles. The Golden Chain also hit the Top 20 Small Publishers Fiction List in May 2011. Margaret is a long standing contributor to Writing Magazine for which she writes the Fiction Focus column and an author interview for each issue. She’s also a creative writing tutor for the London School of Journalism.