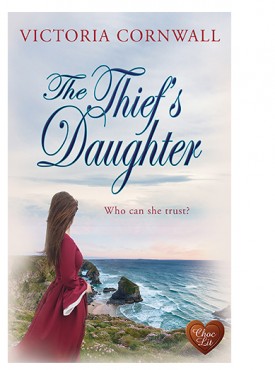 Hide from the thief-taker, for if he finds you, he will take you away …

Eighteenth-century Cornwall is crippled by debt and poverty, while the gibbet casts a shadow of fear over the land. Yet, when night falls, free traders swarm onto the beaches and smuggling prospers.

Terrified by a thief-taker’s warning as a child, Jenna has resolved to be good. When her brother, Silas, asks for her help to pay his creditors, Jenna feels unable to refuse and finds herself entering the dangerous world of the smuggling trade.

Jack Penhale hunts down the smuggling gangs in revenge for his father’s death. Drawn to Jenna at a hiring fayre, they discover their lives are entangled. But as Jenna struggles to decide where her allegiances lie, the worlds of justice and crime collide, leading to danger and heartache for all concerned …

Cornish Tales Series.  Other books in series: The Captain’s Daughter, The Daughter of River Valley and A Daughter’s Christmas Wish

Available as an eBook on all platforms. Paperback available from all good book shops and online stores. The Thief’s Daughter is her debut novel and the first in her Cornish Tales series.