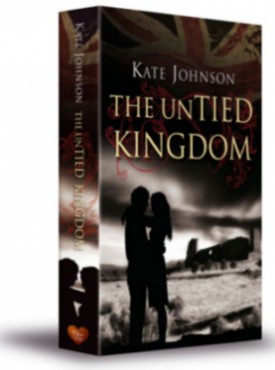 The portal to an alternate world was the start of all her troubles – or was it?

When Eve Carpenter lands with a splash in the Thames, it’s not the London or England she’s used to. No one has a telephone or knows what a computer is. England’s a third world country and Princess Di is still alive. But worst of all, everyone thinks Eve’s a spy.

Including Major Harker who has his own problems. His sworn enemy is looking for a promotion. The general wants him to undertake some ridiculous mission to capture a computer, which Harker vaguely envisions running wild somewhere in Yorkshire. Turns out the best person to help him is Eve.

She claims to be a pop star. Harker doesn’t know what a popstar is, although he suspects it’s a fancy foreign word for ‘spy’. Eve knows all about computers, and electricity. Eve is dangerous. There’s every possibility she’s mad.

And Harker is falling in love with her. Kate Johnson is a prolific writer of romantic and paranormal fiction. Kate is Choc Lit’s youngest author and lives near Stansted, Essex. She is a self-confessed fan of Terry Pratchett, whose fantasy fiction has inspired her to write her own books. Kate worked in an airport and a laboratory before escaping to write fiction full time. She is a member of the Romantic Novelists Association and has previously published short stories in the UK and romantic mysteries in the US. She’s a previous winner of the WisRWA’s Silver Quill and Passionate Ink’s Passionate Plume award.

Her first UK debut novel, The Untied Kingdom was shortlisted for the Contemporary Romantic Novel Category Award in 2012. It also won an online Best Book Award.