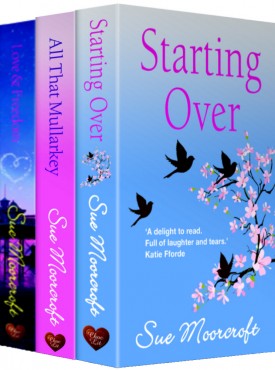 Available as a Kindle eBook bundle

They are all available to purchase separately or together as a set of three on Kindle (more to be added soon).

New home, new friends, new love. Can starting over be that simple?

Tess Riddell reckons her beloved Freelander is more reliable than any man – especially her ex-fiancé, Olly Gray. She’s moving on from her old life and into the perfect cottage in the country.

Miles Rattenbury’s passions? Old cars and new women! Romance? He’s into fun rather than commitment. When Tess crashes the Freelander into his breakdown truck, they find that they’re nearly neighbours yet worlds apart.

Despite her overprotective parents and a suddenly attentive Olly, she discovers the joys of village life and even forms an unlikely friendship with Miles. Then, just as their relationship develops into something deeper, an old flame comes looking for him …

Is their love strong enough to overcome the past? Or will it take more than either of them is prepared to give?

The writing’s on the wall for Cleo and Gav. The bedroom wall, to be precise. And it says ‘This marriage is over.’ Wounded and furious, Cleo embarks on a night out with the girls, which turns into a glorious one night stand with…

Justin, centrefold material and irrepressibly irresponsible. He loves a little wildness in a woman and he’s in the right place at the right time to enjoy Cleo’s.

But it s Cleo who has to pick up the pieces of a marriage based on a lie and the lasting repercussions of that night. Torn between laid-back Justin and control freak Gav, she s a free spirit that life is trying to tie down.

But the rewards are worth it!

That’s what Honor Sontag needs after her life falls apart, leaving her reputation in tatters and her head all over the place. So she flees her native America and heads for Brighton, England. Honor’s hoping for a much-deserved break and the chance to find the mother who abandoned her as a baby. What she gets is an entanglement with a mysterious male whose family seems to have a finger in every pot in town.

Martyn Mayfair has sworn off women with strings attached, but is irresistibly drawn to Honor, the American who keeps popping up in his life. All he wants is an uncomplicated relationship built on honesty, but Honor’s past threatens to undermine everything.

Then secrets about her mother start to spill out … Honor has to make an agonising choice. Will she live up to her dutiful name and please others? Or will she choose freedom?

Love & Freedom won the 2011 Best Romantic Read Award from the Festival of Romance.