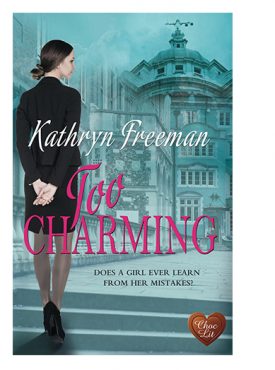 Does a girl ever really learn from her mistakes?

Detective Sergeant Megan Taylor thinks so. She once lost her heart to a man who was too charming and she isn’t about to make the same mistake again – especially not with sexy defence lawyer, Scott Armstrong. Aside from being far too sure of himself for his own good, Scott’s major flaw is that he defends the very people she works so hard to imprison.

But when Scott wants something he goes for it. And he wants Megan. One day she’ll see him not as a lawyer, but as a man … and that’s when she’ll fall for him.

Yet just as Scott seems to be making inroads, a case presents itself that’s far too close to home, throwing his life into chaos.

As Megan helps him pick up the pieces, can he persuade her he isn’t the careless charmer she thinks he is? Isn’t a man innocent until proven guilty?

Kathryn was born in Wallingford, England but has spent most of her life living in a village near Windsor. After studying pharmacy in Brighton she began her working life as a retail pharmacist. She quickly realised that trying to decipher doctor’s handwriting wasn’t for her and left to join the pharmaceutical industry where she spent twenty happy years working in medical communications. In 2011, backed by her family, she left the world of pharmaceutical science to begin life as a self-employed writer, juggling the two disciplines of medical writing and romance. Some days a racing heart is a medical condition, others it’s the reaction to a hunky hero…