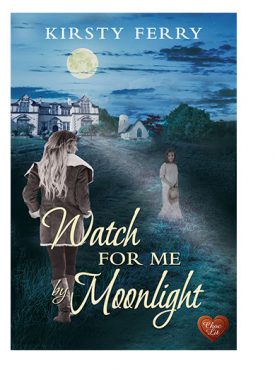 Watch For Me By Moonlight

Available as an eBook, in audio & a paperback

“It was the first full moon since that night. She waited and watched by moonlight, as she had promised …”

When her life in London falls apart, Elodie Bright returns to Suffolk and to Hartsford Hall, the home of her childhood friend Alexander Aldrich, now the Earl of Hartsford. There, she throws herself into helping Alex bring a new lease of life to the old house and its grounds.

After a freak storm damages the Hall chapel and destroys the tomb of Georgiana Kerridge, one of Alex’s eighteenth-century relatives, Elodie and Alex find a connection in the shocking discovery brought to light by the damaged tomb.

Through a series of strange flashbacks and uncanny incidents, they begin to piece together Georgiana’s secret past involving a highwayman, a sister’s betrayal and a forbidden love so strong that it echoes through the ages …

Available as an eBook and audiobook on all platforms. In paperback and audio CD from all good bookshops and online stores.