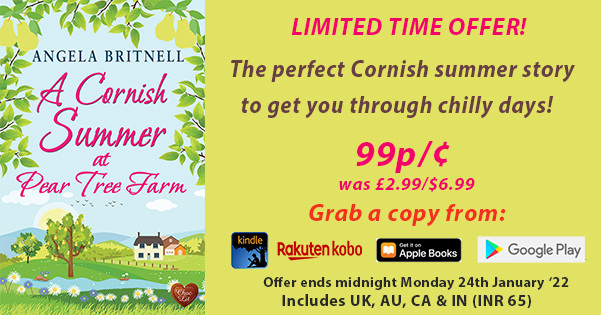 Nessa Vivian is determined to keep her parents’ business afloat, but Pear Tree Farm near the backwater Cornish village of Polgarth didn’t do well as farm, and it’s not faring much better as a camp site. Maybe it’s due to Nessa’s habit of taking in troubled runaways for next to nothing. Or perhaps her sister Lowena is right – caravans named after Beatles’ songs and homegrown pears are not enough to turn the farm into a tourist haven. Then another troubled runaway turns up, posing the greatest threat yet. Ex-musician Ward Spencer from Tennessee is certainly intriguing, but could his plans to put nearby Tregereth House on the map mean Pear Tree Farm is finished – or does his arrival signal a second lease of life, and not just for Nessa’s business?

An uplifting summer romance to be read any time of the year!

THERE’S ONLY A FEW MORE DAYS TO MAKE USE OF THIS OFFER. GRAB IT NOW BEFORE IT’S GONE!