The Motorcycling Granny Returns With Her Third Book Release!

The Motorcycling Granny Returns With Her Third Book Release! 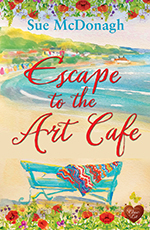 THE MOTORCYCLING GRANNY RETURNS WITH HER THIRD BOOK RELEASE!

Lllantwit Major local Sue McDonagh is revving her engine and getting set to ride back into the charts with her latest book.

Escape to the Art Café (9781781894637), her third novel with publishers Choc Lit, will be released in paperback at the beginning of August. It follows Sue’s previous bestselling books, Summer at the Art Café and Meet Me at the Art Café.

But whilst Sue will no doubt find some time to celebrate her new release, it’s no secret that she’s a very busy lady – not only is she a bestselling author, she’s also an accomplished artist with her own studio in Cowbridge and helps run Curvy Riders, a national women-only motorbike club, after she began riding motorcycles in 2009 (with two replacement hips – but that’s another story!)

With Escape to the Art Café, Sue has once again found a way to combine her love of writing with her other three great loves: motorcycling (the book features a woman who steals her cheating ex’s motorbike to run away to Wales), art (Sue contributed her artwork to be used for the book’s gorgeous cover) and, of course, the beautiful Gower coast.

Whilst Sue’s new book has all the major ingredients which made her previous novels special, this new novel is slightly different to her others when it comes to the heroine of the story:

“The inspiration behind Escape to the Art Café was that my previous two books had featured female main characters who’d lost confidence in themselves. I wondered how I’d deal with a main character who had bags of confidence to start off with. She had a tendency to blurt, acted first and thought about the consequences maybe some time later. What would her character arc be? What could she learn by the end of the story? If she was already so confident, why didn’t she already have what she needed?”

The result is the irrepressible Flora Bexton, who will no doubt find a place in readers’ hearts. Flora has just lost her job and her boyfriend in quick succession – but instead of moping around, she responds in the only logical way: by stealing her ex’s motorbike and escaping for a holiday by herself on the Welsh coast. Once there, she soon finds sanctuary at the local Art Café where the legendary hot chocolate and cake go some way to helping mend her broken heart. But with Flora being Flora, trouble is never too far away – and when gorgeous Aussie-Welsh lifeguard, Jake Foley, steps in when she needs help the most, she realises that her ‘holiday’ is beginning to feel more like home with every passing day.

Escape to the Art Café is released in paperback on 3 August and is available from all good bookstores and online retailers.

Filed under: News, Press Release and Tagged: 2021, August
← Previous Next →